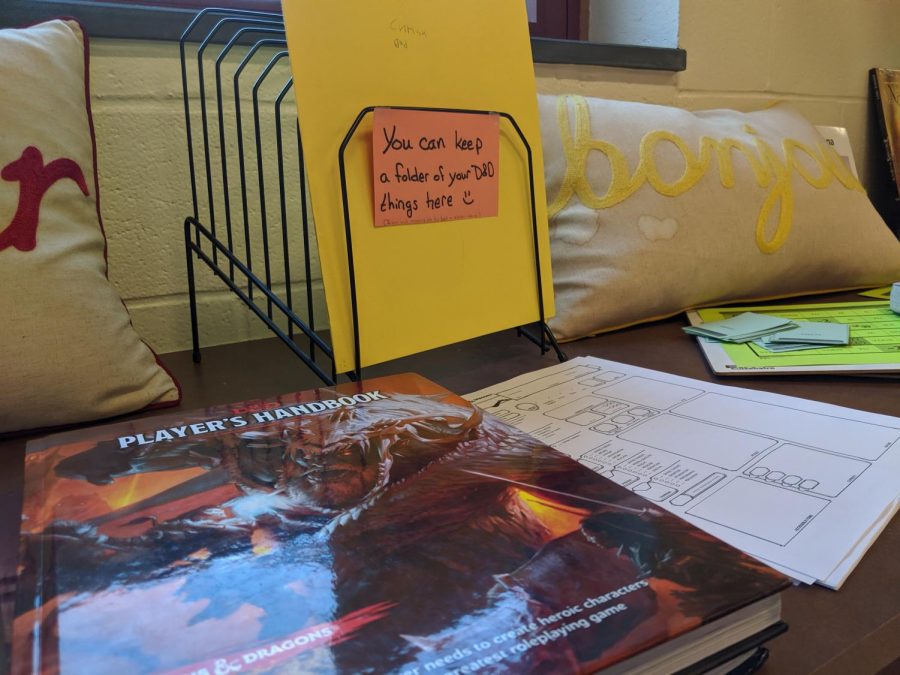 Club adviser Lisa McMeekin keeps the D&D Player's Handbook and character sheets on a shelf in her classroom.

PAHS French teacher Lisa McMeekin has played the tabletop fantasy role-playing game Dungeons & Dragons (D&D) for four years. In September, she bought the new edition of the D&D Player’s Handbook at Punxsy game store D-Generation Next Games, where she saw students Alex Meko and Quentin Strong. When Meko and Strong discovered she played D&D, McMeekin said, they made her a proposition.

“They asked if I played D&D, and I said yes,” she said. “They said, ‘that means we can make a club, right?’ I said, ‘I guess if you guys want,’ not thinking they’d do anything with it.”

But they did. On Sept. 18, Meko and students Jordan Gillen, Dawson Neufeld and Timmy Simmons met with McMeekin to start their club. McMeekin appointed them as the club’s officers and worked with them to draft club bylaws, which they sent to Principal Jeff Long that day. The school board discussed the club on Oct. 3 and approved it on Oct. 8, cementing D&D Club as PAHS’s newest official club.

Meko, who said he enjoys D&D because of its fantasy elements and the creativity it allows, started playing D&D four years ago after a camp counselor introduced him to the game. He and his friends have played together since, and he said they created D&D Club because they wanted to open the game to more people and have more time to play it.

“Me and my friends play, but we never had time out of school, so we decided to let people join it through school,” Meko said. “So not only do we have more people to play with, but we also have a time and place.”

D&D Club held its first meeting on Oct. 21. McMeekin said she was happy with its turnout. Many of the club’s members are new to D&D, McMeekin said, so the club will focus for now on teaching the basics, like character creation and the rules. Once they gain more experience, she said, they will start playing the game. She said the club will hold campaigns, long-form games that involve a Dungeon Master leading players through a story, and dungeon raids, shorter experiences in which players defeat waves of enemies.

McMeekin is D&D Club’s adviser. However, she also advises Drama Club, Gifted and Foreign Language Club, so she said she will rely on D&D Club’s officers to take charge. Meko, the president, said he wants to help the club become a place for students to collaborate and explore their interest in the game.

“My plans are to just get people interested in doing it and make it a fun way for people to meet up and play D&D,” he said.

McMeekin said she plays D&D because she enjoys its roleplaying aspects, detail and adventure. She said D&D “is a great way to build friendships” and hopes club members will not only have fun when they play, but also learn to work together with others and make new friends.

The club will meet again on Monday, Oct. 28. McMeekin said the club will use this meeting to plan future after-school and weekend meetings for campaigns. She added that the club welcomes anyone, regardless of experience, to come to the meeting and learn more about D&D.

“If anyone is interested, whether they’ve played or not, they’re welcome to come to our meetings and check out the game,” McMeekin said.