Powder Puff King to be announced at half time 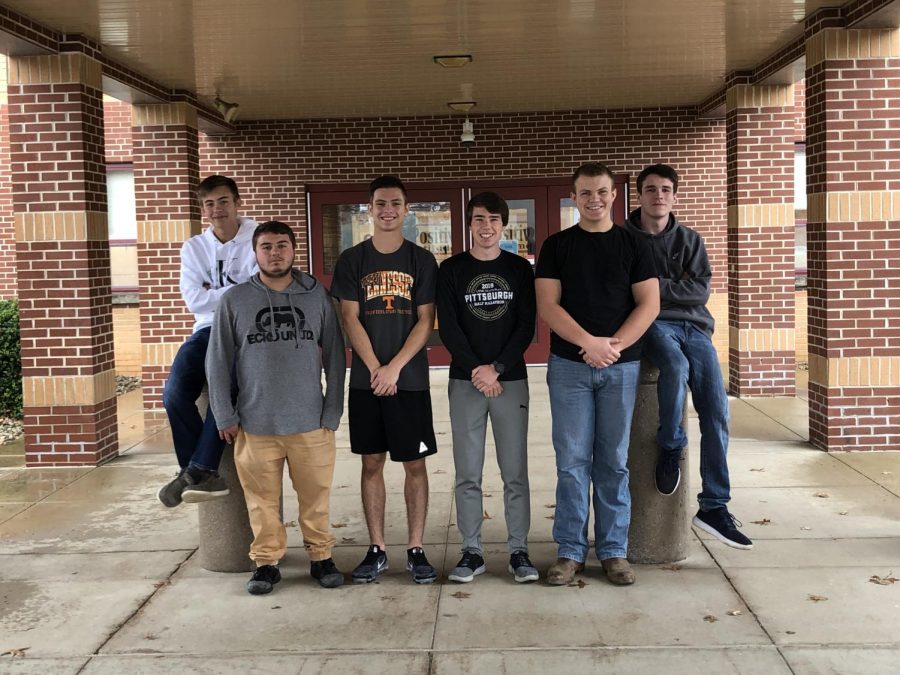 The Powder Puff King will be crowned tonight during half time of the annual Powder Puff football game. Members include Zack VanLeer, Cody Umbaugh, Alec Greenblatt, Corbin Heitzenrater, Austin Martin, and Josh Smith. The game kicks off at 6:30 and will feature the Spooky Seniors versus the Jack 'O Lantern Juniors. All proceeds from the game will go to the Make-A-Wish Foundation, Leslie's Closet, and Lisa's Ladybugs.

On Wednesday, October 23rd, during halftime of the Powderpuff game, the Powderpuff King’s Court will be crowned. The seniors selected Alec Greenblatt, Corbin Heitzenrater, Austin Martin, Joshua Smith, Cody Umbaugh, and Zack VanLeer to be on King’s Court.

Alec Greenblatt’s plans after graduation are to “Catch them all.” He is a professional sniper and Call of Duty player, who is a part of the FaZe clan. His favorite teacher is Mr. Tygert because, “He always knows how to make me laugh.” His favorite memory is winning the egg drop challenge in Mrs. Lainey’s class with Ethan, also known as, Big Guy.

Greenblatt claims that he is Mrs. Lainey’s favorite student because Zack always makes up lies. He believes that his class gets along well, and will leave a great mark on the school. His escort is Brianna Hoover.

Corbin Heitzenrater enjoys fishing and playing Nitroball. As a matter of fact, his plans after graduation include being a professional nitroball player. His favorite teacher is Mr. Bishop because of his teaching style and sense of humor.

Heitzenrater’s favorite memory was going to Hershey for cross country and Washington D.C. for a social studies field trip. He enjoyed this because he got to spend time with his friends and make memories. Heitzenrater believes that his class will leave a humorous mark on this school. His escort is Allie Doverspike.

Austin Martin’s plans after graduation include attending Rosedale Technical College. His favorite teacher is Mr. Plansinis, because he is the “chillest” teacher he’s ever had. His favorite memory is when he shot his first buck. Martin is one of the senior football players and enjoys it because it pushes him to do better in school. He also loves coaching powderpuff and said, “Being a powderpuff coach is really exciting.”

Joshua Smith plans on going to the Navy to have a career, and he does not plan on coming back to Punxsy. Smith’s favorite teacher is Mr. Conrad because he has ‘some killer chops.’ His favorite memory outside of high school was adopting his dogs, which he treats like humans. He said that they are basically humans and he loves them. In his free time, he third-wheels with his friends, which he has grown accustomed to over time. His favorite high school memory was shaving his eyebrow for a couple of biscuits.

“The funniest class that’s ever been in this school,” Smith said about his class’s legacy on the high school. Smith added that he is Joshua Smith and he approves this message.

Cody Umbaugh’s favorite teacher is Mr. Long because of the way he writes on a chalkboard. After graduation, Umbaugh plans to be Mr. Long’s chalkboard. His favorite memory outside of school was racing with his father. Cody’s favorite high school moment was when Mr. Keller was excited about the shelves made in Mr. Stitler’s room that never got put into classrooms.

“I have absolutely no idea,” Umbaugh said about the mark his senior class is going to leave on the school. His favorite things are spending time with friends and family, hunting, fishing, racing, snowboarding, and working. His escort is Neve Coble.

Zack VanLeer plans on majoring in marking in college, but he is unsure what school he is going to attend. Golf is one of his favorite memories from high school because he said it was fun to be and play with his team. VanLeer said his favorite teacher is Mrs. Lainey because he is her favorite student, so he said he believes it should go both ways. VanLeer said that he Mrs. Lainey’s favorite student as opposed to Greenblatt because he was always there [in physics].
He said his senior class is one of the most fun classes.

“We’re fun. We did a lot. We participated in a lot of events. We really made it fun for all of us – is what I think,” VanLeer said. His escort is Crystal Couser.