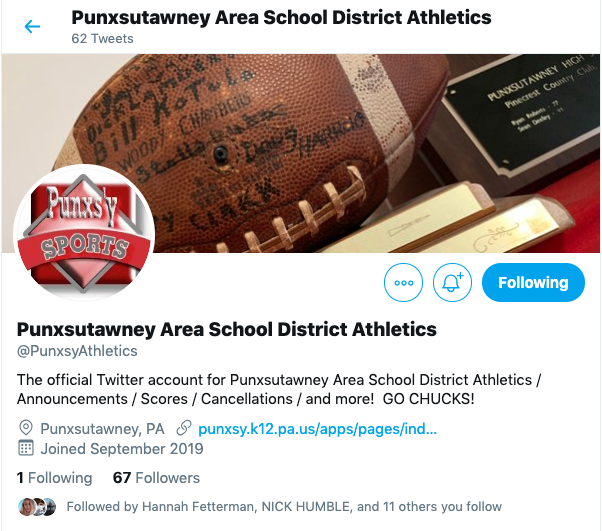 Both secured their footholds on social media sites in early September. Assistant Athletic Director Steve White established his department’s profile on Twitter at the handle @PunxsyAthletics, and Foreign Language Club advisers Carrie Garritano, Lisa McMeekin and Andrew Tygert made the club’s account on Instagram with the username @punxsyflc. Garritano manages the account, but all three advisers create content.

White said IT Specialist Matt Curry, who runs the school district’s Twitter, recommended his department start its own account. Curry said he advised this because although the district’s account and individual sports teams were already tweeting athletics information, he felt a specialized account would disseminate athletics updates more effectively.

“With an Athletic Department Twitter account, we can do more with it, like posting scores and updates,” Curry said. “Ultimately, it just gives us another way to communicate with people in addition to the website.”

White said the department’s Twitter account typically reports scores after an event has happened and cancellations or changes to an event’s time when they occur. The account tweets several times daily and sometimes includes photos to supplement updates.

White said the department posted their Twitter handle to the school district’s website to promote the account to the community. White added that he relies on coaches to spread the news to athletes and their parents.

The goal of the Twitter account, White said, is to make accessing athletics information easier so more people can stay informed.

“I look at this as a widening of our net to get more people to see what’s going on, whereas some people would not check out our particular sports webpage,” he said.

Like White, Tygert said he and the other advisers principally use Foreign Language Club’s Instagram account to send out information. Unlike White, though, Tygert said he typically posts club news as memes instead of text updates.

“For instance, we had the running girl who looks like she’s running late for anyone who had to turn in their fundraisers late,” he said. “We try to make it fun that way.”

Tygert said he and the other advisers made the account because they wanted to ensure they could still communicate with club members, as the office is trying to cut down on announcements this year. The club already uses Canvas and the app Remind to communicate, but Tygert said he wanted to use Instagram because he felt students would check it more often. Garritano added that she thought students would prefer Instagram because it is “more relatable.”

Tygert said although the advisers currently run the account, he plans to transfer ownership to students. He said he is considering creating a “social media manager” officer position in Foreign Language Club and allowing him or her to post foreign language memes and news updates.

Curry said clubs and schools can benefit greatly from using social media. He added that social media is “one of the best tools” for communicating with others and the community.

“It’s a way of connecting with the world around you,” he said. “In its best forms, it allows us to connect and collaborate with people. Social media is the no. 1 media outlet for people to get news and updates.”