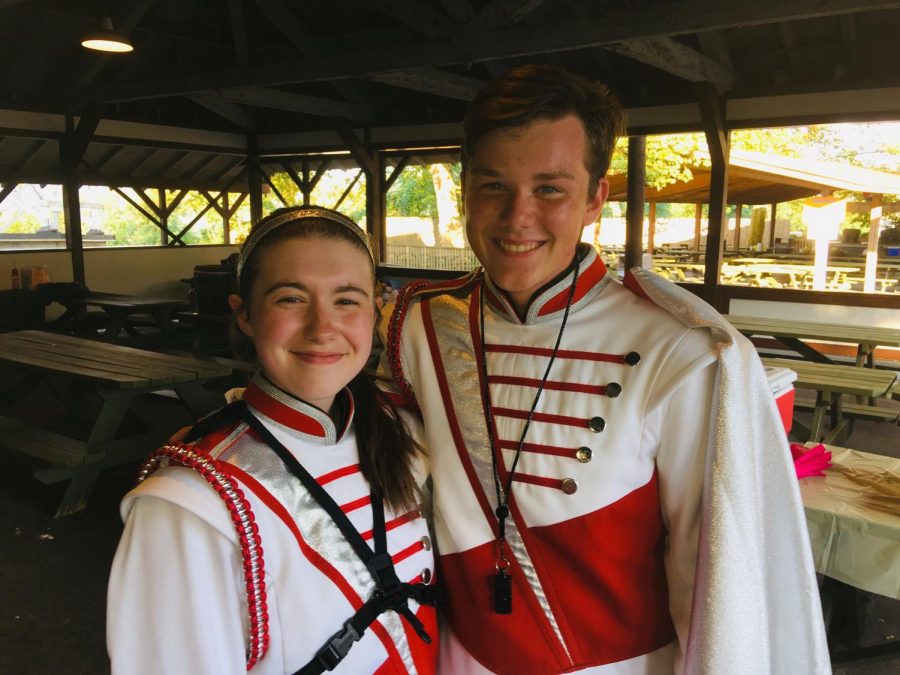 Drum Majors, Madi Barr and Mason Johnston, work as a team to lead the band.

It’s halftime on a Friday night. The stadium lights reflect off the brass instruments on the field. Against a sea of red, there are two white uniforms belonging to the drum majors, Madison Barr and Mason Johnston.

Over the course of the past seven years, Barr has learned to play the Bb Clarinet, Bass Clarinet, Eb Contra Clarinet, bass drum, bass guitar, and the tenor saxophone. She has not only learned how to play different instruments, but she said she has gained countless memories with the band.

“Band has had an incredible impact on my high school experience…Most of my favorite moments have taken place with the band, especially during Friday night football games,” Barr said. Now she is making so many more memories as drum major.

Barr called being drum major an honor. She said she believes that it is a great responsibility, but she loves every second of it.

“I’m so thankful for the opportunity to be one of the drum majors this year, and I’m very happy I have an awesome partner [Johnston],” Barr said. Barr said that a drum major is the leader of the band, and they have to do whatever needs to be done. Most significantly, the drum majors need to be a positive influence on their fellow band members.

Barr added that she has always wanted to audition for drum major, and she wanted to be involved in band as much as she could be. Her family and friends encouraged her to audition, and she is thrilled that they did.

Johnston started 4th grade playing the trumpet. However, he can now play the tuba, trumpet, and mellophone. He said band has impacted his high school experience drastically. It has given him the opportunity to meet new people, and he now has a group of people he said he calls “family outside of home.”

Johnston said he has always enjoyed music and wanted to be involved, so he decided there was no better way than to audition for drum major. He views a drum major as a leader, teacher, and influencer.

As a drum major, Johnston has many responsibilities. He said he wants to ensure that everyone is having a good time and there are no problems within the band.
“I am very grateful to have this experience and I would love to thank the band and Mr. Cessna as well as Mr. Caine for choosing me to be a drum major for the 2019-2020 season,” Johnston added.

“Be yourself,” is the biggest advice Johnston and Barr could give to someone planning on auditioning for drum major. Barr commented that auditioning is a good experience no matter the result. Johnston’s advice is to pick a piece out of your comfort zone to show that you are willing to be vulnerable and work outside of your comfort zone.