Homecoming royalty to be crowned under Friday night lights 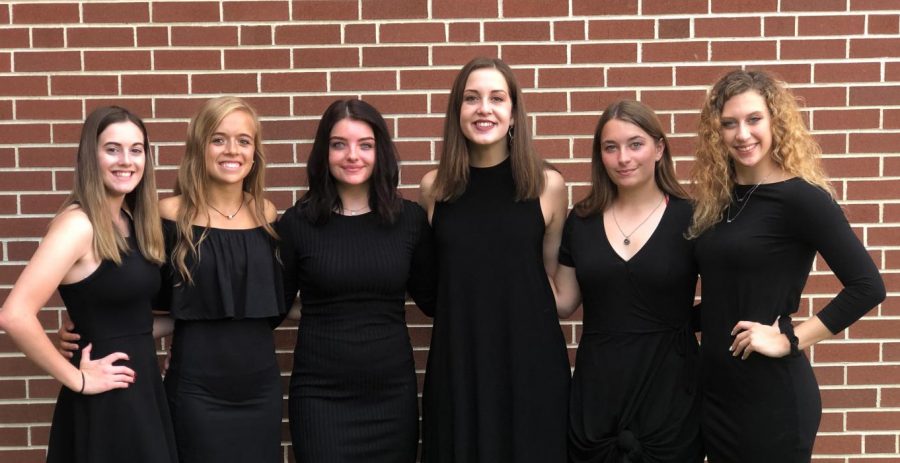 Voting began Wednesday, Sept. 4. Seniors received ballots in activity period that day and listed the six girls they wanted on the Court. The next day, they chose their top six from a pool of the 12 most commonly voted girls. The results came in over the announcements later that day.

Grace Hall, daughter of Rob and Stephanie Hall, said she enjoys activities ranging from doing finger guns to roaming the halls during class. She has played volleyball since seventh grade, and she is a captain this year. Hall said playing on the team throughout high school boosted her confidence and gave her a community.

“It [playing volleyball] means being a part of something bigger than yourself, being a part of a team and a family and being willing to give everything you’ve got,” she said.

Hall said she plans to attend Slippery Rock University and teach high school English. Hall said English is a versatile subject that “everyone can benefit from,” and she said she wants to teach because she wants to support students during their teenage years. Her escort is Corbin Heitzenrater.

Brianna Hoover, daughter of Todd and Peggy Hoover, has participated on the golf team and has been a Student Council representative throughout high school.

“I enjoy that I can focus on myself due to the individuality of the sport while working towards a common goal as a team,” Hoover said. She added that golf is a stress reducer and helps her to relax.

Hoover commented that being in student government allows her to help and improve our school. She added that she enjoys being able to coordinate events that make school more enjoyable. Hoover’s escort is Zack Vanleer.

Alexandra Lansberry, daughter of Shannon and Carrie Lansberry, said she has practiced makeup since she was a young girl. Lansberry said she is passionate about makeup because of the creativity it allows.

“You can do anything with makeup,” said Lansberry.

Breelyn Muth, daughter of Shannon and Jennifer Muth, serves with the Sykesville Ambulance as an EMT. She said she enjoys being able to help others.

“It means a lot to know that I can change someone’s life when they need it most,” Muth said. Muth said she would like to help as many people as she can. On top of serving as an EMT, she is a cheer coach for the Reynoldsville Falcons.

Muth added that being a cheer coach means a lot to her because she gets to work with younger kids and inspire them. She has the ability to inspire them to continue to be a part of high school sports.

In her free time, she said she spends time with friends and family. Muth’s escort is Micah Kriebel.

Makena Nesbitt, daughter of Robb and Amy Nesbitt, holds the school pole vault record. She said doing gymnastics when she was younger inspired her to vault, as both disciplines involve “a lot of coordination and being upside down.” Nesbitt said she quickly fell in love. She has trained both at school and Steel City Pole Vault in Pittsburgh ever since, which she said helped propel her to her record-breaking 10-07 jump.

“Last season, I did have it a little bit rough, just from burnout, overtraining and overall frustration,” Nesbitt said. “Somehow I just had a breakthrough. All of my training came to a peak, and I reached a goal I’ve been waiting for for a very long time.”

Nesbitt said she plans to continue vaulting after high school at West Virginia University. She said she intends to major in either biomedical engineering or pre-med, as she said she wants to change lives and pioneer new scientific discoveries. Nesbitt’s escort is Max London.

Megan Sherry, daughter of Rick and Debbie Sherry, has served as a director for two of the Dramatics plays. She said she didn’t want to perform, so she decided to run for director. Sherry said that being a director made her feel like a mom of all the drama club members.

She added that her friend group would be completely different if she wasn’t a part of the drama club. She not only serves as a director for our dramatics club, but she also helps with her youth group. She is a student leader at The First Church of God.

“I think it’s [youth group] just mainly for me being able to spread all the love and happiness with it,” Sherry said. In her free time, she says enjoys spending time with friends and family, being a camp counselor, traveling, helping others, and volunteering for church functions. Sherry’s escort is Timothy Simmons.