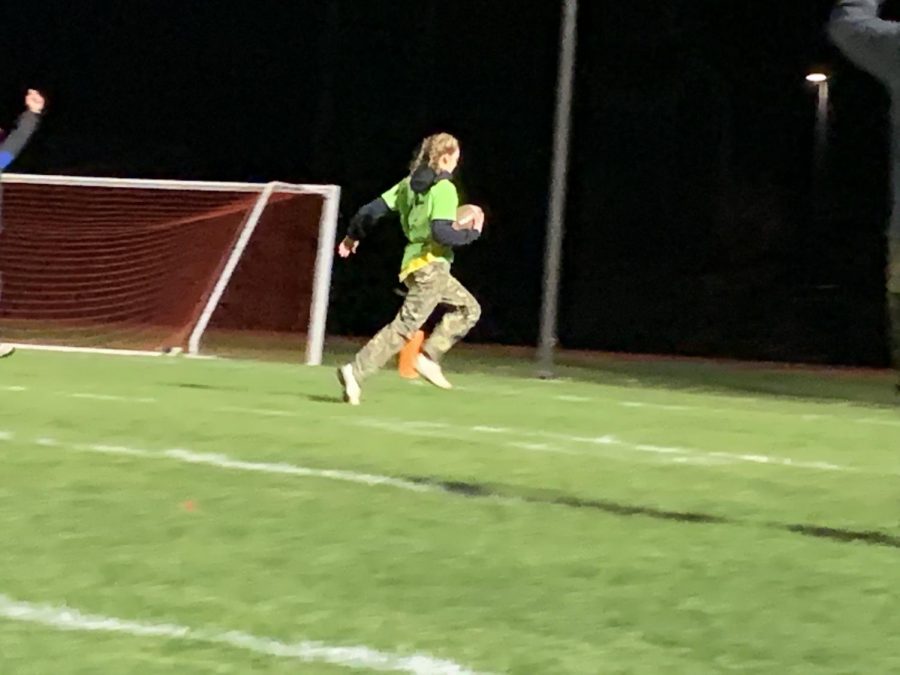 Katelyn Griebel, senior, scores a touchdown for her team. The seniors never lost the lead.

On November 12, the Sour Patch Kids Seniors won the Powder Puff 2020 game against the Jolly Rancher Juniors. The final score was 20-8.

“I think overall we were pretty good,” Brandon Ishman, senior coach, said. “Obviously not nearly as good as last year. Last year we were really doing a lot. This year they [the juniors] were stomping us a lot more than I would’ve liked, but we’re still doing pretty good.”

The seniors carried the lead throughout the game. It wasn’t until the fourth quarter when junior Laura Rittenhouse scored a touchdown.

“We were expecting to have a blowout like last year,” senior Chloe Sproull said, “but this year they [the juniors] really gave us some competition, and they were a very worthy opponent.”

Both teams had two days of practice. “Practices were pretty organized,” Alex Phillips, junior coach, said. “We broke up into groups, ran plays, figured out whose positions was what. They went very smoothly.” According to junior Alexia Matts, the coaches “made everything enjoyable.”

As for the seniors, “Practice was actually a little bit disorganized,” Ishman said. “This year we weren’t nearly as focused and ready for the game as last year.” According to Sproull, the game “was more about having fun,” since the seniors recalled their experiences from last year.

Coaches Kyle Nesbitt and Phillips took their loss with dignity. “They [the seniors] worked hard,” Phillips said. “They did pretty good on defense. They had that pick-six; that really hurt us and our momentum.”