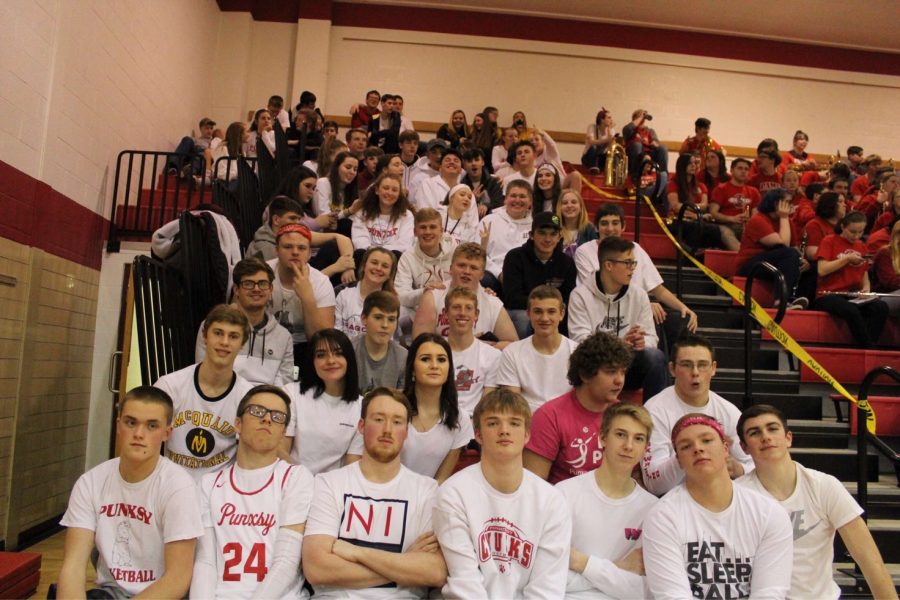 From glimpses in high school movies, pep assemblies are peppy, students are proud, and school spirit never waivers. Punxsutawney High School, however, is not from a movie, and students have begun to notice.

According to the Shadow’s poll into school spirit, the majority 107 of the 173 polled students answered that on a scale from (0-10) our school has less than or equal to 5/10 in the school spirit category. Another 48% of those polled students said that they do not feel recognized in assemblies.

Based on the poll, 81.5% of students think involving more extracurricular assemblies in pep assemblies would be beneficial to school spirit, and it would allow them to feel more recognized for how they contribute to our school.

Senior, Jacob Bellerillo said he believes that there is no pep at our school at all.

“They don’t care that they are here. There are no people who are proud to be a part of Punxsy High School,” Bellerillo said. Bellerillo is both a member of the band and the football team.

“I’m proud to be a part of a band that is that good, and a lot of our sports teams go to districts, they do fairly good – except for football,” Bellerillo said. He said that he believes that nothing is changing because the administration and leadership don’t think it is important.

Garrett Eddy, junior, said it is impossible to increase the school’s pep because nobody cares other than those kids that are in sports. Eddy said he recommends to have better, more interesting games and would like to see the principals more involved.

“The cheerleaders do everything and set up the games, and I feel like more groups need to do that,” Eddy said. He said our school does not have pep, and he does not believe the band helps pep up the assembly, although nothing that they are very talented and hardworking individuals.

“I feel like we don’t do a lot of spirit weeks, and we didn’t do dressing up for Halloween this year, and during pep assemblies, there are those people that watch and don’t care,” Deppen said, adding that sometimes he thinks pep assemblies get out of hand.

Coming up from the middle school, both Bennett and Deppen believe that students showed more pep during those assemblies, but now that students are older they see pep assemblies as more of an obligation.

They both said they feel that Student Council does not adequately include the rest of the student body, and Deppen said forming a Spirit Club seperate from Student Council may help to increase school spirit by changing themes for student sections and pep assemblies.

Principal Jeff Long said that the lack of school spirit runs much deeper than that, attributing it to the way the current students view things.

“It [spirit] used to be more important to kids now. Your values and perception of what’s important are different-I think,” Long said. Long added that our students do not feel very strongly about our school anymore. He said kids are not as entrenched in Punxsy School District because now students can go cyber and still take Punxsy’s curriculum.

Students used to come in and say they wanted to take fan buses, Long said, instead of him pushing for it. Based on Long’s statements, seniors used to want to prove they were the best during pep assemblies, but now students do not do that. He said that the student section here is strong, but our students don’t tend to travel with the students.

“We have diminished culture – or diminished positive climate in the community about this school. Kids don’t feel very strongly for their school,” Long said. He said that he doesn’t know of a program to improve the school, but he believes painting the school gives students more ownership of the building.

“It allows students to put a stamp on this school that is going to last for six or seven years down the line,” Long said.

Long said he is actively looking for ways to make Punxsy more proud to be at the school. He said that the administration needs to find new ways to serve the “new customers” at our school as opposed to offering the same curriculum that was around when he attended Punxsy, meaning change is long overdue.