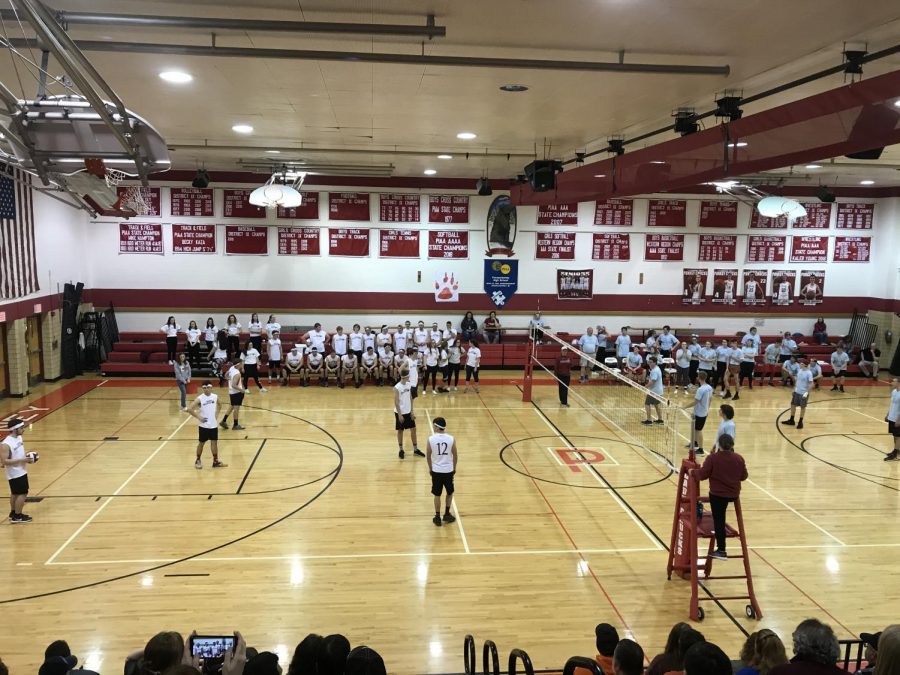 Addison Neal, senior, prepares to serve during the final set of the game.

On Thursday, March 12th, the Super Smash Seniors and the Joe Mama Juniors faced off in the first boys’ volleyball PowderBuff game.

Grace Hall was a coach for the seniors and she was proud of all her players.

“They started out strong and there was a blimp in the middle, but they had a lot of energy at the end and pulled out the win. And I’m proud to be a Super Smash Senior,” Hall said. The senior players were equally proud of the game’s outcome.

Samuel Rodgers helped his team to their victory, leaving the audience at the edge of their seats.

“We clearly played with superior volleyball skills and destroyed the juniors,” Rodgers said. Although, the juniors are still hopeful to take a win next year.

Eliza Neal, a coach for the juniors, said she is excited to take the victory next year.

“We did just as well as we expected. We did amazing. Even though we lost this year, we are coming back next year. Watch out, future juniors!” Neal said.

Graham Lott, a junior player, said he believes that they all played to the best of their ability.

“We did really well and toughed it out until the end. I’m super proud of how hard we played. Who’s Joe?!,” Lott said.

The first PowderBuff game ended with a proud senior victory, but with juniors hopeful to win next year.