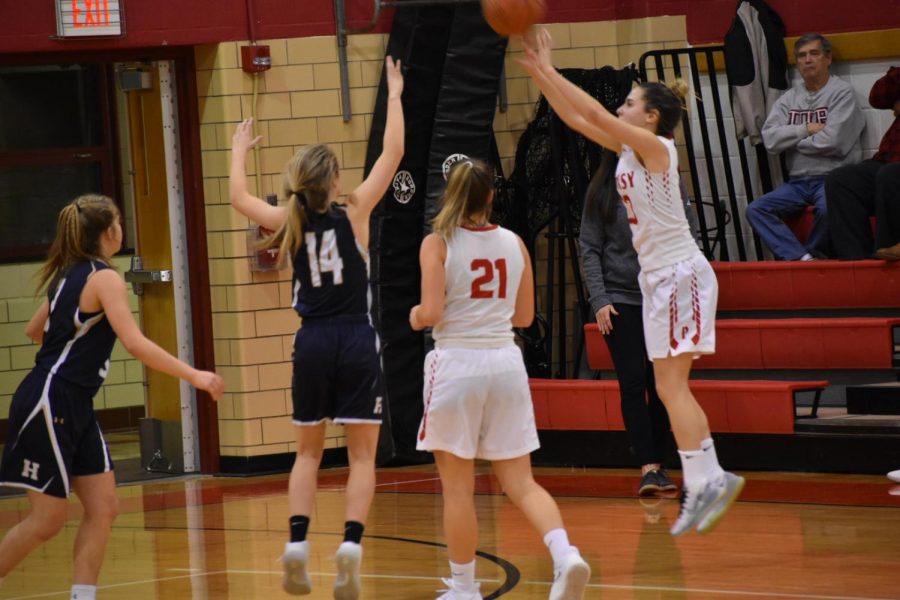 Play hard, win games, work together and make it to Districts. These are the goals of the Punxsy girls basketball team. The team led by head coach, Mike Carlson just finished their season with a record of 18-4. Even with injuries and other downfalls, they have still pulled out wins.

Solo senior, Abby Gigliotti is currently a big man for the team. She has played basketball since 4th grade, and has developed a tight bond with each girl growing up.

“It really shaped who I am today, I made bonds with my teammates and coaches. It made mentally and physically stronger, and it taught me determination and hard work,” Gigliotti said. A setback for Gigliotti this year was when she tore her ACL against Hazelton when she was going up for a layup and landed wrong. She recovered very quickly and came back out on the court not long after.

“I had to do it for me, I couldn’t accept giving up playing basketball yet. I wanted to prove to myself and myself only, that I was strong enough to do it,” Gigliotti said.

The hard work and motivation to win has been shown by their upcoming game next week as they play for the district title. The girls have been preparing “individually and together as a team, then game plan will come sometime next week,” Carlson said.

Carlson has been coaching for the past five years, and he works really well with these girls. The girls have won districts the last four years and won a state playoff in 2017 all while working with Carlson.

Junior, Riley Presloid who has played basketball for about nine years, is one of the top scorers on the team. Presloid has gone to districts the past two years and this will be her third game. “At the beginning with all the injuries I was a little nervous,” Presloid said, “but people definitely stepped up which made a huge difference and helped this season go really good.”

“We have a good flow with each other. And know how each other play on the court,” Presloid said.

As the team members said, the girls basketball team has such a strong bond and flow together that will help them compete very well in the district game. Currently with a record of 18-4, they are hoping to add onto those wins with a title and more. The team will be competing in the game for the district title on February 27th, at Clarion University against the winner of the game between Bradford and St. Mary’s.